The large 1.0-type MOS sensor enables high sensitivity shooting with low noise. The sensor boasts a light-capturing area that is approximately four times larger than that of the 1/2.3-type sensor to guarantee a wide dynamic range.

Adding "i zoom" to our optical 20x zoom, maintains high resolution while enabling ultra-high resolution 32x zoom in HD mode and 24x zoom in 4K mode. This enables distant subjects to be captured clearly. Furthermore, 75.1° horizontal wide-angle shooting enables capture of the entire area, even when installation space is limited.

The camera supports HDR (High Dynamic Range) to prevent blown-out highlights and blocked-up shadows and enable picture quality close to that of the naked eye. Conforms to BT.2020.

Vibrations of the mounted surface caused by doors opening and closing, audio systems and other installed equipment are automatically corrected to ensure stable shooting.

Equipped with Night Mode for infrared shooting. The use of IR rays in low-light situations enables shooting in situations that would normally be difficult, such as when capturing wildlife (image output is black and white).

Equipped with an Adaptive Matrix function that automatically controls matrix calculation coefficients. This enables shooting while preventing color overloaded, even during live events and on stages with strong blue LED lights.

Pan and tilt operate from a minimum speed of 0.08°/s to a maximum of 180°/s in high-speed mode. This is approximately 3 times the speed of our current product*1 for rapid capture of the intended target. Furthermore, a low noise level of NC35 or less has been ensured when operating in normal mode, which is perfect for shooting in quiet environments*2.

Images shot in 4K can be output in their entirety while simultaneously cropping parts of those images. The cropping position can be specified from a maximum of 3 locations to enable simple operation from the Remote Camera Controller AW-RP150GJ, a web browser or other operations screen.

Up to 100 still images can be captured and saved as JPEG files to the built-in camera memory.

Connection with AR/VR systems has been enabled via FreeD-compliant command output. Camera tracking information (pan/tilt/zoom/focus/iris) is output according to a synchronizing signal to facilitate construction of virtual systems without an encoder.
AR: Augmented Reality
VR: Virtual Reality 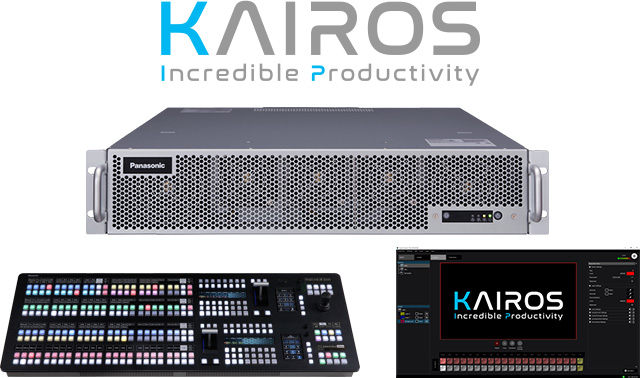 This product is compatible with the IT/IP platform "KAIROS". It is a live video production platform developed based on a new concept and innovative architecture. It incorporates proprietary, ground-breaking software to maximize the CPU and GPU capacities for video processing.

This is a setting that does not turn on the tally lamps of cameras installed on stages at events, especially concert halls and stages and prevents distracting the performers and allows for more natural filming. The tally indicator on the controller lights up so that the cameraperson is aware of which camera's video is being used.

Equipped with a Large Tally Lamp

Easy to see from a distance.

Camera IP image output, settings and control can be performed using a web browser on a computer connected via an IP network. In addition to PCs and Macs, iPads, iPhones*1, Androids and other mobile devices can be used for operation, and this pursuit of easy-to-use interfaces has enabled smooth camera control from remote locations.

For more information about AW-RP150GJ

A wide range of outputs are supported: 12G-SDI, 3G-SDI, HDMI, IP and even Optical Fiber output. The addition of 4K/HD simultaneous output guarantees the right output for the operation at hand. 4K video can be down converted to HD directly within the camera.

Strong security is ensured by encrypting video data before transmission.

RTMP (Real-Time Messaging Protocol) is supported to enable direct upload of video to live-streaming services such as YouTube Live and Facebook Live. This means a live stream can be broadcast directly from the camera.

The AW-UE150W/K can be upgraded to an NDI | HX compatible model if purchasing a license. Highly efficient NDI | HX compatibility enables high-quality video to be encoded and transmitted in real-time and input signals to be directly sent to a switcher (AV-HLC100) without the need for an IP decoder.
After purchasing an NDI®|HX license, the license can be activated using the Activation function of the free software, EasyIP Setup Tool Plus (supported from Ver. 1.3.6 or later).